I’ve been meaning to write this blog entry for about a year now. X-Plane 8 allows the airport surface area to be sloped. Here’s some of the back story and details.

Back when Austin and I were doing the design work for teh X-Plane 8 scenery system, we made a decision to allow sloped runways. The issue is that flattening the airport area requires the sim to edit the mesh on the fly, something we wanted to avoid.

(X-Plane’s scenery system is based on removing the editing of scenery from the sim itself…”X-Plane is not a GIS”. I did some slides on this once, I’ll try to post them soon.)

Instead we decided to simply drape the airports over the terrain, no matter how it was built. We figured that the sim’s engine could handle this (as it turned out, there were bugs that were fixed in the 8.20 patch) and in real life runways are often quite sloped!

Unfortunately when theory meets practice, things can get ugly…the biggest problem we saw was that in the original set of DSFs, the underlying terrain was very bumpy, and the smoothness requirements for a plane to take off are very high. (Flattening is also necessary to match the ground height with other sims for online flight.)

So we retrofitted the X-Plane engine with terrain flattening for airports. The flattening engine is meant as a last resort, to get absolute flatness and repair an already-flattened DSF. Its goal is not visual quality, but rather speed — that is, we can’t take 10 minutes analyzing the DSF each time we load one, or the sim will freeze pretty badly. (If this requirement that the flattener be fast ever goes away, we could do a much nicer job of flattening.)

The current flattening engine has two unfortunate properties designed to keep it fast:
– It flattens an area that is larger than the airport surface area (it rounds up) and
– It flattens vertices that are in the flattening area, not whole triangles.

The first limitation means that it may crush mountains around the airport, and is not appropriate for airports that are embedded in complex, hilly terrain.

The second limitation needs more examination. If a mesh triangle is partly inside the flattening area and partly outside, then the triangle is not flattened – one vertex is moved, and the others aren’t, which cause it to be sloped. 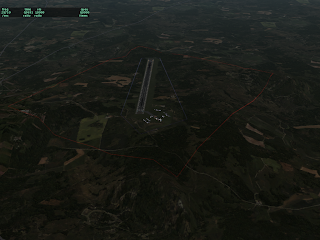 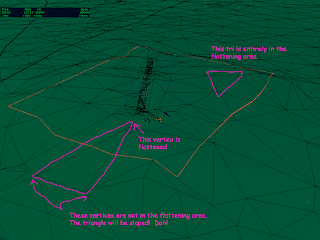 In these pictures, the blue lights represent the airport area perimeter, but the red lights show the full area that is flattened. I have artificially set the airport elevation much higher than surrounding terrain, to make the flattening obvious. Notice how some triangles become highly sloped!

When we make the global base scenery, we use the default airports from Robin’s database. So even if you do not want to submit your custom airport layout to Robin’s database, consider submitting some kind of layout to Robin. If an airport is present in the default scenery, then the area will be pre-flattened, which makes the sim’s flattening both work better and maybe even unnecessary.

Also, you can use the 130 code in a custom airport area to increase the airport boundaries, increasing the amount of flattening. But this is a mixed blessing – as you can see the mechanism is very imprecise. If you do use a 130 code in a layout and you submit the layout to Robin, please remove any 130 boundaries that have been set to a large area to flatten an airport.