This is a feature I looked at putting into X-Plane 9, but it turned out that it affects so many different parts of the sim (and has to be done all-or-nothing) that it got kicked to v10. Consider these two pictures of the default B777 (the lighting was not adjusted, only the time of day): 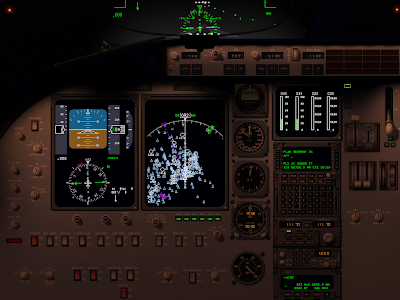 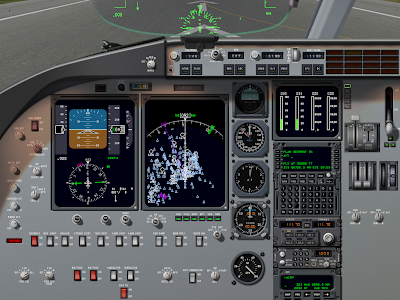 The answer is: in real life your pupils would contract in the sun, letting in less light. The sun is really rather bright, so the daytime panel would still look normal, but the apparent power of those posts lights would be a lot less, because your eyes are less sensitive. In other words, the relative strength of the sun and post lights is wrong in the second image.

Computer monitors don’t have a huge dynamic range for how much brightness they can put out. So we can’t hope to display the absolute brightness of the scene correctly. Instead we need to make everything brighter at night (to simulate your night vision) and dimmer during the day, like this: 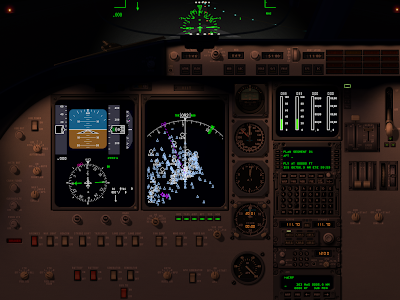 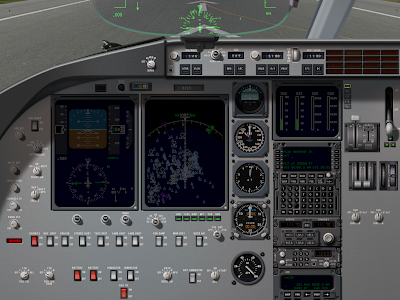 In this set of images, the night image is matched precisely to the previous one, but as the sun comes out, the apparent brightness of all lit textures has been scaled down to simulate the effect of your eye becoming less sensitive due to the flood of sunlight.

What happened to the EFIS and moving map? The answer is that they too are not as apparently bright relative to the sun as they would be at night.

There is one hitch here: plenty of real airplanes have light sensors for various avionics; the avionics will automatically turn up their brightness during the day. So it is possible (I am no expert on the 777) that in the real plane, as the sun rises, you might not have to adjust your instrument brightness; the sensor would do it for you. The pictures above illustrate what you would see if no automatic adjustment is made.

Auto-adjustment presents a challenge: currently two wrongs make a right. We don’t auto-adjust the brightness of instruments, but we don’t simulate the apparent visual brightness relative to the sun, and the result are instruments that look adequately bright at all times of day without user adjustment.

I think in the productized version of this feature, authors will have two options for anything lit:

The tricky part will be finding the right mapping for legacy airplanes into the new system.

8 comments on “Let Your Eyes Adjust”