Tweaking the Prop Disc in 940

X-Plane 940 allows plugins to customize the prop disc. Details here on the wiki.

I put these datarefs in so that modelers wouldn’t have to try to model prop discs with OBJs. The problems with prop discs are many:

In short, prop discs are weirdly special-cased enough that I thought it would be better to provide a general set of parameter datarefs for prop discs and let X-Plane do the drawing.

These options are not available in Plane-Maker. Why not? That’ll be my next post.

I have ranted in the past about the importance of not treating beta builds of X-Plane as having finalized file formats. Generally a beta should be used to explore, experiment, and test old content, but not to create new finished work or ship product. File formats sometimes change during beta to work around bugs we find.

Another reason not to depend on the file formats of new betas is that sometimes we screw up. In the case of 940 beta 1, the code that converts 930 airplanes forward to the new 940 electrical system is pretty buggy (hence the reports of electrical systems doing wonky things, panel instruments disappearing, and general weirdness).

I’ll try to post some info on the new electrical system on the Wiki, but for now: if in beta 2 you have a bug with a plane that used to work in 930, send us the 930 version of the plane so that we can convert it and watch the conversion screw up. If the plane is already in 940 format we don’t know what our conversion code broke and what you edited in Plane-Maker.

Posted in Aircraft, Development by Ben Supnik | Comments Off on 940 Beta 2 – Recovert Airplanes

X-Plane 940 now supports normal maps on OBJ models (both scenery and airplane). I’ll get more formal docs up once the rest of my office is moved and unpacked but here’s the details for now:

The normal maps are in “blender” format see here. The alpha channel is optional; if it is present, it serves to modulate the level* of specularity. Opaque means full specularity, transparent means none. You can use this feature to make some parts of an object shiny and some dull on a per-pixel level.

Normal maps are only available for objects and only appear if pixel shaders are on and per-pixel lighting is enabled.

Normal maps should be PNG format, not DDS – they will not be texture compressed because S3TC compression tends to kill them. (There are some modern formats for normal map compression supported by the newer cards but we don’t use them yet.)

I have received several requests for a transparent runway with a physical surface type. That request is just strange enough that we need to look back and ask, “how did we get here?”

The “new” airport system, implemented in X-Plane 850 (with a new apt.dat spec to go with it) is based on a set of lower level drawing primitives, all of which are available via DSF. In other words, if Sergio and I can create an effect to implement the apt.dat spec, you can make this effect directly with your own art assets using a DSF overlay. This relieves pressure on the apt.dat spec to become a kitchen sink of tiny details.

The goal of apt.dat is to make a visually pleasing general rendering of airport data. DSF overlays provide a modeling facility.

It turns out there are two things the apt.dat file “does” with the rendering engine that you can’t do in an overlay DSF:

(If you were to place a sequence of approach lights with rabbits in an overlay, every single light would flash at the same time because the DSF overlay format does not have a way to adjust the object’s internal timing parameter.)

My thinking at the time was that the actual runway visuals and physics would be implemented together via either draped polygons or a hard OBJ.

So why do authors want a transparent but hard runway? The answer is orthophotos. With paged orthophotos, it is now possible to simply put down orthophotos for the entire airport surface area (whether as overlays or a base mesh) at some high resolution (our runways are 10 cm per pixel – I’m not sure if the whole airport area can be done at that resolution) and not have any special overlays for the runways. The transparent + hard runway would change the surface type.

I’m not sure if this is a good idea, but I’m pretty sure that this feature belongs in overlay DSFs and not the apt.dat file.

I’m not sure we would even want the runway outline to be the source of hard data. If there are significant paved areas outside the runway then a few larger hard surface polygons might be more useful.

In Plane-Maker you will see that there are two “glass” lighting modes for instruments – one called “glass” and the other called “glass (translucent)”.

What’s the difference?  The difference is how they respond to their lighting rheostat being turned down.

Which one do you want?  It depends on what you are doing.  The rules I suggest are:

Posted in Panels by Ben Supnik | Comments Off on Glass vs. Glass (Translucent)

I’m not sure if these will make it into X-Plane 9.30 (we’re trying to close down features, but it doesn’t do much good to hold off features that help people make airplanes) but…while I was in Italy I created a few more manipulator types.

The set of manipulators let you change the value of a dataref directly with a mouse-click – the various flavors control how the dataref is changed.
These manipulators are the natural corollary to the command manipulator, which runs a command on a click.
Why have both? Commands are good, but they don’t cover 100% of sim functionality (just like datarefs don’t cover 100% of sim functionality).  By having both, it will be possible to control switches and buttons that are best accessed by a dataref change.
For the basics on commands vs. datarefs, see here.
The generic instruments already write to both commands (via the trigger instrument) and datarefs (via the rotary instrument) – these new manipulators provide the same functionality for 3-d cockpits.
Posted in Cockpits, File Formats, Modeling by Ben Supnik | Comments Off on A Few More Manipulators

X-Plane’s panel system does not have true “masking” based on a bitmap.  You can clip an instrument to its rectangular region, but most masks are made by overlaying another layer or instrument on top of the moving parts.  Examples include the circular mask for the moving map and the outside of the artificial horizon dial.

If you are using ATTR_cockpit then what you see in the OBJ is just like what you see in the 2-d panel, and the masking problem is simple: pick a mask that matches your background.  In particular, if the back of the panel is black, your mask must be black; if the back of your panel has a gradient, the mask must contain a copy of a slice of the gradient.
But there are two cases where this rule does not work the way you might expect.
Masks for 2-d Spotlights
The 2-d spotlight textures (panel-2, panel-3, etc.) have a strange property: they light the background of the panel (the “burned in layer”) per-pixel but the overlays are lit per vertex. This is a cheat to keep the frame-rate high.
Normally this is not a problem – the moving parts are small and look different enough from the background that the lighting mismatch is not visible.  But if you have a mask in the 2-d panel and spot lights, it will not match!
Unfortunately there is not much you can do about this.  The only thing you can do is to keep the spotlight color uniform over the entire mask region.
Masks for Cockpit Regions
When you use ATTR_cockpit_region, the lighting model for your 3-d cockpit changes: instead of drawing the panel (as you saw it in 2-d), X-Plane calculates the albedo (day-time) and emissive (“_LIT”) components of the panel separately and then combines them with real 3-d lighting.
The good news is that the spot light problem is no longer a problem.  Since the spot lights are 3-d and are applied to these final “panel textures”, a mask that matches the background will blend perfectly.
But in order to mask, you need to know which part of the panel texture you are masking (albedo or emissive!).  If you are masking the albedo texture (e.g. a mechanical artificial horizon), create a mask that looks just like the panel background.
But for a glass instrument, the moving parts go into the emissive layer.  Your mask must be pure black!  Where did I get that from?  The emissive layer adds light to the object.  Black is an absence of adding light.  So pure black ‘erases’ any light-only elements (which include all glass EFIS instruments, etc.).
One nice thing about this strategy: you can build a custom glass instrument (with a black mask) and put it over any background. This means you can reuse your art assets no matter how they are positioned on the panel.
Posted in Cockpits, Panels by Ben Supnik | 3 Comments

I Lost My Objects

It seemed like opposite-day at Laminar Research…Austin saying that an error shouldn’t quit the sim and me saying the error was never okay, ever. Well, I relented: with X-Plane 930 beta 8, if your scenery pack is missing objects, you can still fly.  Instead you get a single error message like this: 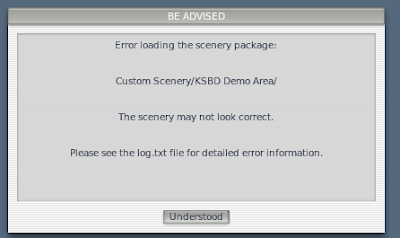 That is the “non-fatal” error dialog box – you will see it only once for each scenery pack with a problem for each time you run the sim.  It means that at least one thing is wrong with your scenery pack, but you need to look at Log.txt to see what’s wrong. For example, you might see this in the Log.txt file:

In this case, X-Plane couldn’t find the object KSBD_example.obj – the sim is also listing all of the places it looked.  Note that only the first location is a good location – the other 3 are legacy search paths that date all the way back to version 6.  It is likely that in the next major version we will trim down our search paths significantly.

A few comments on this whole situation:
Anyway, Austin was right to make the error non-fatal.  Besides being a little bit nicer for users who don’t know (or care) why their pack is gone) it lets authors get a list of all missing objects with only one run of the program.
* Fatal?  In computer terms, a fatal error is one that makes the program quit, e.g. the error is fatal because it kills the program.
Posted in File Formats, Modeling, Scenery by Ben Supnik | 6 Comments

With X-Plane 930 beta 8, we finally integrated the latest version of Max’s Cessna 172 SP. Grab the new beta and try it – he’s added a number of new features that demonstrate some of the newer X-Plane 9 airplane features.

The cirrus jet has been similarly updated. I plan to use the Cessna for a series of tutorials showing how to use these recent X-Plane features.

I have said this before, but now it’s finally true: new file specifications are subject to change in the middle of beta!

In particular ATTR_light_level has changed slightly from beta 7 to beta 8. If you are using this feature in your objects, you will need to update your objects.

A new ac3d beta will be posted later today that supports the updated syntax.

You can read about the syntax here.