I’ve always thought we should come up with cool marketing names for new code in the sim. Look at ATI and nVidia. When they reduce the amount of VRAM on their cards and steal your system memory, they don’t call it “hey, we’re cheap bastards so we left off some chips and hijacked yours instead”. Instead they call it “TurboCache™” (nVidia) or “HyperMemory™” (ATI). Don’t those sound much better?

Perhaps we can call the new rain effect (due out in the next RC) “MegaRain XT” or, um, “HyperSpash GT” or “Virtual Droplet Technology (VDT)”? I don’t think I’m cut out for a career in product marketing. Anyway, here are a few screenshots: 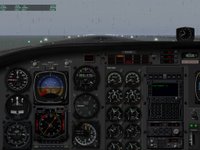 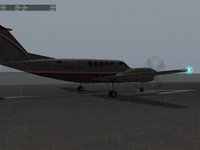 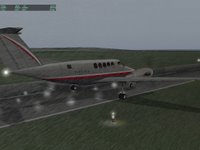 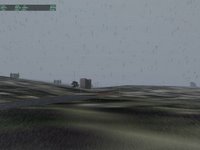 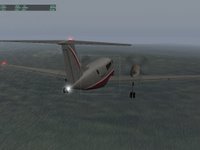 There will probably still be some camera angles where the rain looks weird; it’s a compromise between image fidelity and framerate.

Apropos of nothing: Ami sent me this flash video. I must warn you…Chris described it as “the corniest flash I’ve ever seen”….and in the world of flash that truly says a lot. Think of it as the blue pill for your, um…bits. Anyone wanna make a flash video showing the virtues of MegaMoister 2.0? 😉

(I promise the next blog entry will contain more information and less attitude!)

This blog entry describes how to file a performance bug for X-Plane. You don’t have to participate in X-Plane betas, so if this procedure seems scary or too complex, I suggest simply waiting for the final sim release. But if you want to help, this procedure explains how to do it. It is not enough to just tell us “the framerate is bad now” – we will just ask for the information that this post explains how to provide.

First, to file a performance bug, you will need two clean copies of X-Plane: the current beta and the previous final release. Use the web-based installers to install clean copies of both of them. (Hint: you can download the current final release, then copy the folder and run the beta installer on the copy to save download time.) We always need a relative comparison of framerate between two versions to isolate how efficient the sim is from how fast your hardware is. If the sim is slow on your computer and has always been that way, that’s not really a problem with the sim. But if the sim used to be blazingly fast and now it is not, we can fix that.

In order to get a clean test we need to control every aspect of the simulator. Fortunately these clean installs have default preferences. But you will need to go through and make sure you have:

For your framerate test you will basically run the sim in a fixed configuration and take some screenshots.

It is very important that the camera angle be fixed. Use the “takeoff” menu item to place the plane on a runway. Do not taxi the plane into position; even the slightest change in the positioning of the camera can have a large impact on framerate, so if there can be human error in moving the camera, then the comparison is not valid. By pre-placing the plane you can get the same camera angle every time.

Some important notes on screenshots:

These last two allow us to exactly copy what you have configured. Please do not use “real weather” when you do these tests.

For each performance report, please send us the six screenshots, the log.txt after quitting both versions of the sim (so two log.txt files) and please tell us in the email the framerates of each sim both when paused and unpaused. (Take the screenshot when unpaused.) So there will be four fps numbers to report for every given test.

So for a third party bug there might be eight fps to report – all combinations of: old and new, paused and unpaused, clean and with the add-on.

Posted in Development by Ben Supnik | Comments Off on HOWTO: File a Performance Bug

Is X-Plane on Crack?

I just fixed a bug in the mesh crack-patching code. This is a tricky subject, so here’s some information before you file bugs:

Two separate scenery tiles (whether DSF or ENV) may not line up perfectly when placed edge-to-edge. The most common reason is because their elevation data can come from different data sources, but in a few cases files from the same render can have alignment problems.

(In the case of the global scenery, if we have special circumstances like water or airports that must be flat and the features span a tile boundary, the flattening may not work the same way in both tiles. The scenery is also rendered on blocks on different computers, and the blocks may not tile perfectly.)

Whether the error is due to a bug or just two scenery packs together, the sim tries to do its best to fix any gaps in the terrain mesh. (The sim does not try to fix different textures that touch; this is beyond the sim’s capabilities of analysis.) X-Plane will take whichever file is loaded most recently and try to realign its edges to match the old edge. When this works right, you can’t see a seam. More importantly, if an airport spans that border, you can drive over the border (on a runway) without the plane hitting a bump.

I just fixed a bug in the crack-patching code where it would sometimes incorrectly fix a patch. So if you see a ‘crack’ in the terrain (basically you would see the sky color showing between terrain triangles as a sliver of light blue or grey) please report it as a bug, but be sure to include the following information:

As always our bug reporter can be found on a link from //www.x-plane.com/contact.html.

EDIT FROM 2/19/07: this article mentions some bugs with light visibility from X-Plane 850 betas. These bugs were fixed, and the mechanism of detachment is entirely internal to X-Plane. So please bear in mind when reading this that while this describes the internal engine of X-Plane, you as an author don’t need to DO anything special for lights.

One user reported that the taxiway lights are visible a very long way away from the airport. This is true, but it is probably not a cause for concern. By comparison, the airport beacon has a way of disappearing – hopefully less so in beta 11. Here’s what’s going on:

(When I say “light” in this blog post, I mean the little ball of color that is supposed to simulate the look of a light bulb. “Fixture” refers to the 3-d object modeling the real-world device that holds that bulb in place. The actual rays of light cast are not simulated – that’s why the approach lights don’t illuminate part of the plane no matter where you fly. Current graphics hardware just doesn’t give us that ability yet.)

In X-Plane 850 all “lights” are made via OBJ8 objects. The OBJ8 object may contain both 3-d geomemtry that forms the fixture, and one or more “lights”, created via either the LIGHT_NAMED or LIGHT_CUSTOM command. Objects may also have multiple versions based on LOD. If you don’t use ATTR_LOD, a single LOD range is assigned by X-Plane based on how big your object is. (Bigger objects will need to be visible farther away.)

Now here’s where it gets weird. Some of the lights in an object are “detached” by X-Plane from the OBJ and stored separately in the scenery. We do this for performance – the detached lights can be fed to the graphics card via a different mechanism that is much faster than regular OBJ drawing. One of the effects of light detachment is that the detached lights are no longer limited by the LOD of the object. They instead are drawn to much further distances. The fixtures of the objects, however, are never detached…thus some of the airport light OBJs in X-Plane are only visible to 500 meters. We can get away with such a low distance because the light bulb itself is detached and will remain visible.

So which lights are detached? Well, it depends on a number of factors – lights are only detached if they are not subject to animation and they are simple enough to be drawn in bulk. Which lights are these? It’s hard to predict.

If you set the world level of detail setting to “low” or “very low” it simply reduces the LOD ranges of all objects. Thus on “very low” the airport beacon may be seen to disappear before the (detached) taxiway lights. For beta 11 I have tried to set the airport beacon LOD large to be enough that even on such low settings the beacon will be visible farther away.

There is one more piece to the puzzle: all lights become dimmer with distance. So in theory our hope is that the lights will become fully dim due to distance before we stop drawing them with LOD, producing a gradual fade-out rather than a sudden disappearance. But if we don’t tune all of these parameters right, lights can randomly appear to disappear in the distance instantaniously.

If there’s a moral of the story, I’m not sure what it is, except perhaps: this new light system is very new, and I am sure our artists will tune it a bit over the next few versions of X-Plane, helping to hide these implementation artifacts.

EDIT FROM 2/19/07: during X-Plane 850 when I was developing the new lighting system (particularly used for airports, but also for the rest of scenery) I brought up the subject of “detachment”, a internal process by which the X-Plane rendering engine processes lights.

Simply put: detachment is virtually never a factor for scenery authors. Back when I wrote the article, it was possible for an author to make a few special optimizations if he or she knew about detachment. This is no longer true! The sim will correctly optimize all lighting cases as much as possible without any special help from the author.

So….the blog article in its original form follows and may be useful as an insight into how X-Plane works, but as an author, just remember: you don’t need to do anything – just make nice OBJs.

I think I’ve confused just about everybody in the last few days – especially Sergio and Austin – with work on the new lighting system. One reason I’m so scrambled: the internal representation of lights in X-Plane is very different from the commands you can put in an OBJ8 file. So there’s a whole set of terms and ideas that are important to how X-Plane works that I shouldn’t have mentioned to anyone making OBJ8s because they won’t even be part of the file format.

Then there’s detachment. I think I can explain it simply like this: detachment is when X-Plane changes the order that lights are drawn inside an OBJ and the LOD ranges in which they are drawn to improve framerate. 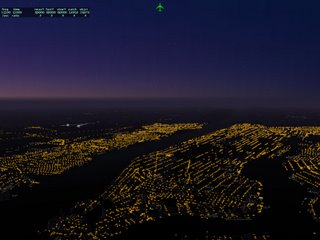 This picture is actually from X-Plane 8.03 I believe. It’s a simple trick: edit the roads file to add street light objects along all roads. Make a street light object with a light command and then turn roads on and watch teh city at night appear.

The only problem is the frame-rate – this experiment brought 8.03 to a standstill.

The goal of detachment is to make textured lights in objects fast enough that this kind of scene can be rendered at reasonable framerates. I do not know if this will be possible, but detachment should certainly improve performance in cases like this.